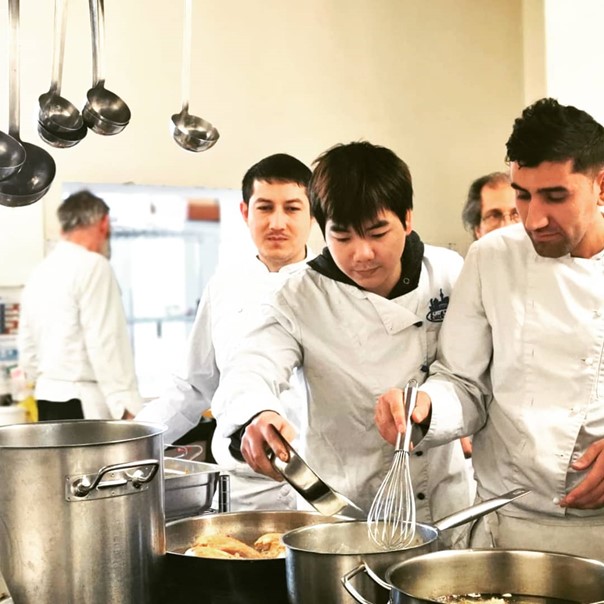 Training and employment for young refugees in the Berlin hospitality industry.

Since August 1st 2015, the model project of kiezküchen gmbh together with DEHOGA Berlin has been supporting refugees to gain a foothold in the Berlin training and labour market. Many refugees have work experience and encounter an industry in which employees from all over the world are part of everyday life.

How does the project work? After detailed counselling on the requirements, activities and career prospects in the hospitality industry, a competence profile is drawn up for the participants. The subsequent German lessons and the internship in the kiezküchen training restaurants are the first test for their entry into the hospitality industry. If the level of German is good (usually B1), the matching process between the applicant and the company begins via a work placement.

Mohammad Alam (pictured above) came to Berlin in 2013 as an unaccompanied minor refugee from Bangladesh. In addition to German lessons and after an internship at the kiezküchen, he completed an internship from October 2015 to January 2016 (Novotel Berlin Am Tiergarten), which was to lead to an apprenticeship as a hotel manager. However, the residence situation proved to be complex and required many visits to the authorities. After all problems were solved, Mohammad started his training on 1 February 2016.

Immediately after fleeing from Western Sahara, Abdalah Elguiar Amar (pictured below) applied to Hospitality in September 2015. Together with 20 other project participants, he learned German intensively from scratch in the coming months and got an insight into working as a cook at the kiezküchen. At the beginning of November, he took advantage of the Mercure Hotel Berlin City’s open day, which was organised especially for our project participants. In conversation with hotel director Philip Ibrahim, he applied for an internship, which began a few days later and seamlessly transitioned into an entry-level qualification. On 1 September 2016, he began his training as a chef.