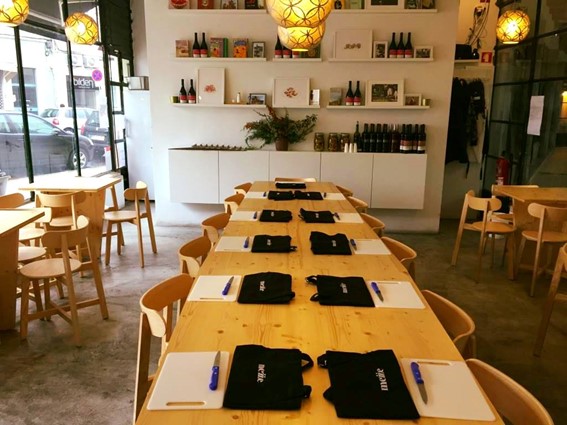 “We bring to the table not just tasty dishes, prepared by hands full of stories: we also bring inclusion, solidarity and tolerance.”

Another project made by refugees and for refugees, mainly from Syria. “We asked a Syrian student living in Lisbon what she missed most. She replied: ‘Pita bread!’ ” This was the starting point for an absolutely pioneering integration project in Portugal: an Arab food restaurant, called Mezze, where refugees from the Middle East can receive training and get a job. This project makes the most of the skills that many women and young people bring with them and provides the tools that will ensure their work and their identity are valued. Thus, it creates sustainable employability solutions and contributes to true inclusion.

Mezze means sitting at the table with friends and family, sharing snacks and conversation. It is a lengthy tasting of small, colourful appetizing dishes where bread is always present. And this project by Associação Pão a Pão is all about sharing, providing work and stability to a group of 10 refugees, mainly Syrians. It started with organising group dinners at the Santa Clara market, but quickly evolved into the opening of a restaurant. Not only because there was no Syrian restaurant in Lisbon, but also because starting one would serve multiple purposes: help reintegrate people (“Portugal has many measures to welcome Syrian refugees, but not many when it comes to reintegrating them into society”) and show the Portuguese the Syrian culture. In addition to gastronomy, they also organize workshops and debates, which help to bridge gaps, reduce ignorance and dispel prejudices.

Mezze opened in Lisbon at the Mercado de Arroios, in September 2017. Its success in the integration of refugees is an example, highlighted namely by Prime Minister António Costa, President of the Republic Marcelo Rebelo de Sousa and the European Commissioner for Migration, Home Affairs and Citizenship, Dimitris Avramopoulos. Associação Pão a Pão won the social entrepreneurship award from the PSA Foundation – Peugeot Citroen (France) and also obtained funding from the Julia Taft Refugee Fund.